Musicians, local dancers highlighted in lineup at new location for 2017

Eight performance groups will be taking the Irish festival stage on Saturday, March 11, as part of the city’s 38th Annual Alltech St. Patrick’s Parade and Festival. The lineup features local musicians and dancers, as well as two international acts.

The festival is part of an all-day celebration that begins at 8 a.m. with the Shamrock Shuffle to benefit Lexington Habitat for Humanity. For 2017, the Irish festival will be held at the Robert F. Stephens Courthouse Plaza at 120 N. Limestone in downtown Lexington. It begins at 10:45 a.m. and the annual “Blessing of the Keg” will be held at the Alltech tents at 11 a.m. The parade begins at 1 p.m.

“We’re excited to bring both local and international performers to our Irish festival stage this year,” said Megan Moloney, vice president of the Bluegrass Irish Society. “Our free, family-friendly event has a little bit of something Celtic for everyone: Scottish pipers, local bands, Irish dancers, a music duo from Northern Ireland and one of the biggest names in the Irish festival music scene.”

The festival performances kick off at 10:45 with traditional Irish dancing from the Bluegrass Ceili Academy, a partner with Lexington Parks & Recreation in providing Irish dance classes to children and adults through Artworks at the Carver School.

Lexington band Liam’s Fancy takes the stage at 11 a.m. for an hour of traditional Irish tunes. They’ll be followed at noon by the shanty-singing duo Drunk & Sailor. The band brings their high-energy, interactive show that’s sure to include audience participation.

Attention then turns to the parade beginning at 1 p.m. as it makes it way down Main Street from Midland Avenue to Upper Street.

At 2 p.m., the William Sutherland Reid Pipes and Drums perform. Originally founded in 1975, the group has played and competed locally and regionally at festivals, concerts and even opened for Rod Stewart at Rupp Arena.

Taking the stage at 3 p.m. are this year’s featured performers, the Prodigals. One of the most successful bands to emerge from the East-Coast Irish scene, the band members grew up largely in Ireland. Their original songs blend a funky and feisty energy that is pure New York with a passion for the traditional music of Ireland. The band has headlined major venues and festivals throughout the United States, Los Angeles and Las Vegas to Chicago, Boston and Maine, as well as abroad in Canada, Germany and Ireland.

At 4 p.m., the Lexington Irish Dancers take the spotlight. The non-competitive performance group regularly performs at local fairs and festivals, including appearances with the Lexington Philharmonic Orchestra at Picnic with the Pops.

Our final performers are straight from Co. Armagh in Northern Ireland. Gypsy’s Wish brings their sound to the stage at 4:30 p.m. Musicians Declán Mac Giolla Cheara and Andrew John Toman weave a mix Irish folk and contemporary rock into an amazing blend of music.

The 38th annual Alltech Lexington St. Patrick’s Parade and Festival is produced by Lexington Parks and Recreation and is sponsored by the Bluegrass Irish Society.

Applications for parade participants are being accepted through March 1 and can be found online at https://lexingtonstpatsparade.org/. 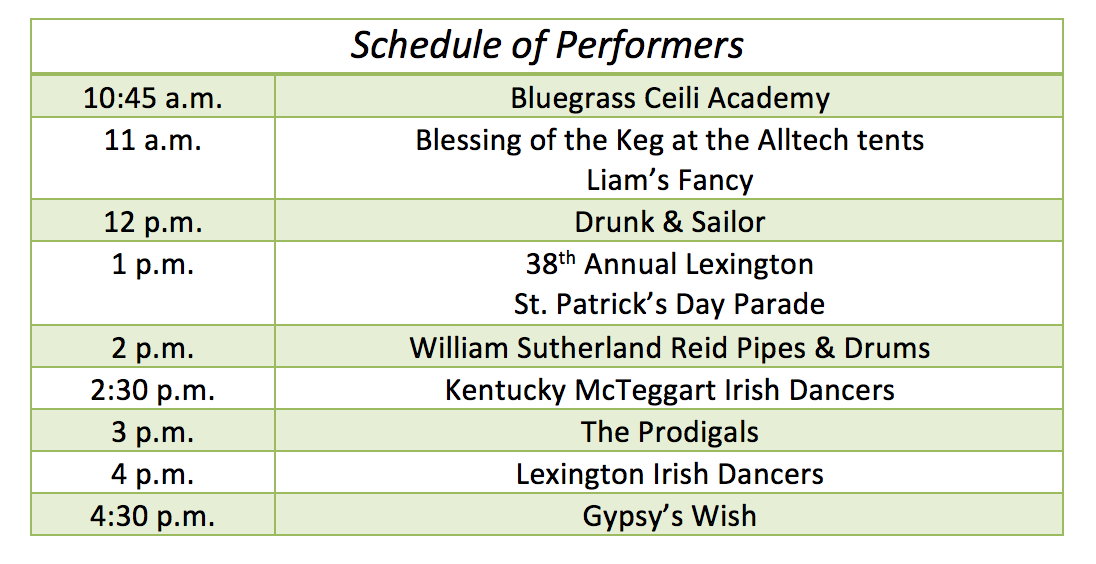